Early in September I received a phone call from an old acquaintance named Joetta who works with a Christian organization in Illinois. She shared that her organization along with 40 or so other conservative Christian groups – such as the American Family Association, Faith2Action, VCY America Radio Network (home of Crosstalk), Eagle Forum, Voice of the Martyrs, Repent America, Liberty Counsel and Sky Angel Communications, etc. – were sponsoring a Republican presidential debate on September 17th. The purpose of this event, officially dubbed the “Values Voter Presidential Debate,” was to ask the candidates critical questions on issues that matter most to Christians. It was hoped that one candidate would emerge from the debate as the clear front-runner, worthy of the support of conservative Christians. Joetta asked me if I would be willing to serve as one of the delegates. After a couple days of prayer, I said “yes.” Soon I was on the plane to Ft. Lauderdale where the debate would be held.

Upon arriving at the Broward Center for the Performing Arts, the location for this event, I went through a brief security check before entering the main auditorium. Once inside, I was led to a section near the back where I was given instructions along with about 400 other delegates. These delegates, like myself, had all been hand selected by leaders from the various sponsoring organizations. Evidently, each sponsor was permitted to appoint a certain number of delegates to the debate.

Each of the delegates was handed a small calculator-like device that would be used to cast our votes. It was explained that we would have about 20 seconds to rate a candidate after he had answered a question. We were to rate each response from 0 to 9, based on how much we approved or disapproved of what was said. Our individual votes would be electronically tabulated throughout the debate. At the end of the evening we would also have an opportunity to select which candidate, if any, we would vote for if the election were to be held that day.

The delegates who I spoke to for the most part realize that America is in serious trouble and that we must repent as a nation and humble ourselves before the Lord individually if there is to be any chance of turning our situation around. I was impressed by the humility and Christ-centered focus of the main organizers. I had never in my life been part of a political event with such a genuine spiritual thrust. On four different occasions during the hour leading up to the debate, we spent time in fervent prayer, being led by various individuals who cried out to the Lord to intervene and turn our nation back to Him. I sensed the presence of the Holy Spirit in a very real and powerful way.

At one point during a time of prayer I fought back tears as I realized that I was in the midst of godly people who were interceding and willing to lay everything on the line for the soul of our nation. We are not alone, I thought; there is still a sizeable remnant of believers who will not bow to Baal! Those who led in prayer pleaded with the Lord, asking Him to bring the best candidate who would serve Him, to the forefront so that Christians could rally behind him. 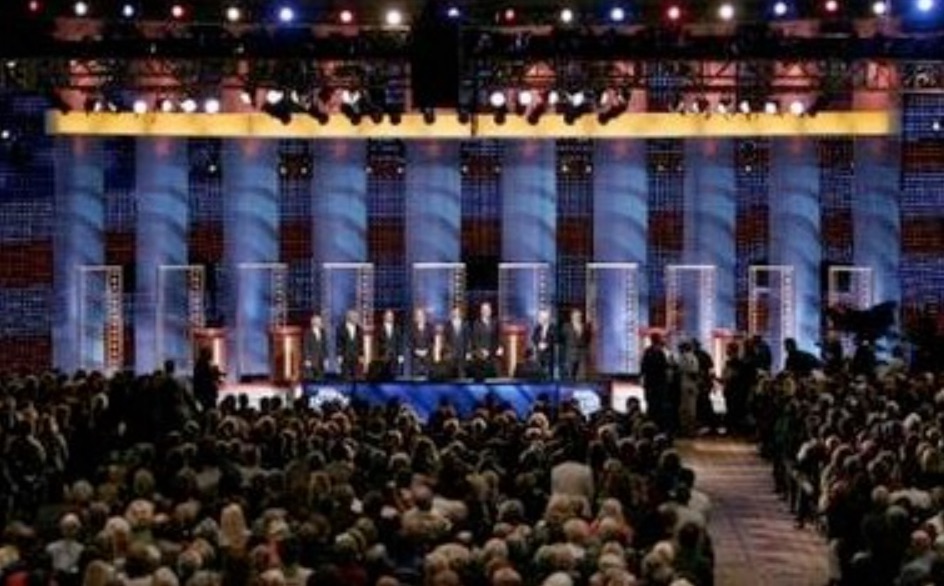 While there were camera crews on site from various national networks, including CNN, to the best of my knowledge none of these activities leading up to the debate were captured for television. The camera people didn’t seem to know how to react to what was going on. In fact, none of the major networks carried the debate. Some networks never even mentioned that this important meeting took place.

Eventually, it was time for the debate to begin. The moderator would be Joseph Farah, founder of WorldNetDaily. Each of the candidates was introduced. From left to right they were Mike Huckabee, Tom Tancredo, John Cox, Sam Brownback, Ron Paul, Duncan Hunter and Alan Keyes. The other invited Republican candidates – Rudy Giuliani, John McCain, Mitt Romney and Fred Thompson – didn’t bother to show up. Guiliani even happened to be in Ft. Lauderdale at the time, only a few miles away. This may have reflected how these candidates really feel about Christians and conservative issues.

The candidates who didn’t show were at times asked questions as if they were standing behind their podiums. Of course, they were given mostly zeros for not being there in person to field the questions. Democratic candidates had been invited to a similar forum, but all declined.

During the course of the debate a wide variety of very direct questions were posed, ranging from issues about securing our nation’s borders and how to respond to the North American Union, to where the candidates stood on Israel and same sex marriage. During one of the rounds, various individuals were brought to the platform to personally address the candidates with their own statements and questions. These individuals included Judge Roy Moore of Alabama; Monica Ramos, wife of the jailed border agent; Pastor Reza Safa, a former Shiite Muslim from Iran; and Peter LaBarbera, President of Americans for Truth about Homosexuality; to name a few.

The debate was streamed live over the Internet at valuesvoterdebate.com where it was watched by tens of thousands of concerned Christians throughout America. Major segments of the debate can still be viewed on this Website for those who are interested. Therefore, I will offer just a brief summary of my personal observations here.

All of the candidates, whether Catholic or Protestant, were quite conservative on most of the social/moral issues. John Cox, a successful Chicago businessman; and Alan Keyes, former Assistant US Secretary of State; were newcomers to this race. Both men are conservative Catholics, as is Senator Sam Brownback of Kansas. The other four candidates are Protestants.

Congressman Ron Paul of Texas made the most waves as he approached social issues from more of a libertarian view, warning not to tamper with our Constitution, lest it come back and be used against Christians (limiting our religious freedoms). Some of his points, while at times appearing out of sink with the other candidates, were nonetheless important, and served to balance the comments of the others. While I would be willing to consider small adjustments to our Constitution, I would do so only if absolutely necessary and so long as it could not backfire against Christians down the road. Ron Paul explained his positions more clearly during his closing comments. They were points well taken. 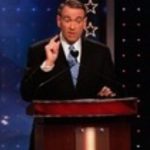 Governor Mike Huckabee, along with Congressmen Tom Tancredo and Duncan Hunter, it seemed, held very similar positions on most issues. However, Huckabee became the clear leader as the debate moved along. I found myself consistently giving him 8s and 9s for his responses. It wasn’t so much that his views were substantially different from those of Tancredo or Hunter, it was more in the way he worded his positions. Huckabee is an excellent communicator – he is very well spoken. He is able to make his points effectively, mixing boldness with humor when necessary. He reminded me in some ways of a modern day Abe Lincoln.

The debate was friendly. There were no nasty exchanges between the candidates. I thought overall it was a very informative and worthwhile experience, giving us a good view of each candidate.

Once the formalities had ended, the delegates participated in a straw poll. Who would we vote for if the election were held that day? After much prayer and reflection throughout the evening I felt confident in casting my vote for Mike Huckabee. Apparently most of the other delegates felt the same way. Here were the final results: Mike Huckabee 63%, Ron Paul 12%, Alan Keyes 7%, Sam Brownback 5%, Duncan Hunter 4%, Fred Thompson 4%, Tom Tancredo 2%, John Cox 1%, Rudy Giuliani 1%, John McCain 1%, Mitt Romney 0%. 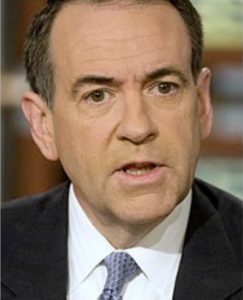 I believe that Huckabee could surprise a lot of skeptics by finishing among the top three Republican contenders in the Iowa Caucus this January. As more conservatives have an opportunity to hear and see him, his support is likely to increase. If Huckabee can capture 15% or more of the vote in Iowa, I believe he would have a fighting chance to become the Republican nominee. The secular media would have to take his candidacy more seriously. Thus far, the media has chosen to discount the importance of moral issues to Christian voters, who are tired of weak, uncommitted, lesser-of-the-evil candidates.

I have not officially endorsed or campaigned for a presidential candidate since leaving my job with the government in the 1980s. Except for a few days in 1995 when I was asked to run for the office of Lieutenant Governor by one of the candidates preparing to run for Governor of Indiana – an offer which I turned down in order to continue in this ministry – I have not considered any direct involvement in political affairs. However, I believe that the upcoming election is so important to the future of this nation that the Lord would have me (and you) do whatever possible to stand in the gap politically as well as spiritually. We must be His salt and light!

We should all understand that one man cannot single-handedly turn America around, no matter how good or well-intentioned he may be. A genuine repentance among our people is also required. It will take strong godly leadership at the top and a groundswell of sincere, repentant followers of Jesus among our citizens to have any hope of altering our nation’s self-destructive course. With God all things are possible!

The Lord has given us a man who might be the strongest Christian candidate to run for the presidency in many decades. Please do not make the mistake of being inactive in the 2008 election because of your disgust for George Bush and national politics in general. We finally have a clear choice. We have the opportunity to elect someone who would not only be strong on economic and national security matters, but who is committed to standing strong on moral and ethical issues without apologies.

Therefore, I urge you to fervently pray for Governor Mike Huckabee and other Christian federal, state and local candidates who will be running. Do not be afraid of becoming involved in campaigning or supporting them financially. Do as God leads. This could be America’s last chance to get it right!!